The Caretaker's Concern can be blamed on Wreck-Loose Island Publishing.
Send all complaints to:
WLIPublishing P.O. Box 1521 Bolton Landing, N.Y. 12814

Want to start reading the blog from the very beginning?

The Caretaker
Grew up in Ho-Ho-Kus, a suburban small town in North East New Jersey. Currently lives and works as a caretaker on a small island on Lake George in Upstate New York.

For Updates via Feedburner:

The Caretaker buys his Tea from:

You can buy your Tea there too:

Check out his work:

Archive of Past Blog Bottom Photos:

Other Blogs to View:

Images
The Caretaker Looks at:

The Caretaker cooks with Penzeys: 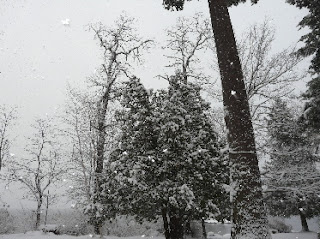 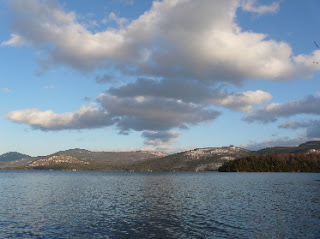 The snow began to fall, quite heavy, at around noon today. It is now, 2 p.m. beginning to slow down. The wind from the South never let up last night so the main part of the Lake did not freeze over at all. Perhaps after this storm blows through the wind will die down long enough for the Lake to freeze over. This Thursday night the weather report calls for a temperature around zero, perhaps the Lake will ice-over then.

Yesterday afternoon the Caretaker got another glimpse of a Bald Eagle while out on the South dock, perhaps it was the same Bald Eagle from the morning. Either way, it would be nice if the bird or birds would take up residence in the immediate area. Speaking of birds the Caretaker is reminded of the owl he found floating in the Lake back in October, and that he has neglected to make mention of it in his earlier reports.

It was October 21st. the Caretaker was coming back from an early morning "photo shoot" on the Tongue Mt. range, around 10 o'clock. The Lake was dead calm. While motoring back to the Island, out of the corner of his eye he thought he noticed something move on the water. Not knowing what it was, and curious, he decided to check it out. When he got to the object he noticed it was a sizable bird. So he took an oar and used it to lift the bird out of the Lake and into the boat. Turning it over he saw that it was an owl, of what breed he knew not--the Caretaker may be a lot of things but ornithologist he is not. Upon returning to the Island the Caretaker put the bird in a cool shady spot. Briefly looked it over for bullet wounds and saw none.

Later that day S. came out to the Island, he didn't know what type of owl it was either. In the end the Caretaker decided to double bag and seal the bird and put it in the outside refrigerator until he could speak to someone with the State. The following day a phone call was put into the DEC, the Caretaker offered to bring them the bird. His hope was that someone there would be able to tell him the type of owl and to see if they would be able to discern the cause of death. Upon presentation of the bird, the biologists on hand could not tell what type of owl it was.

Every so often the Caretaker finds things floating in the Lake, however this is the first time he has found a dead bird. Hopefully the bird was just flying along and died of natural causes in mid-air, maybe a heart attack. Do birds have cholesterol problems? Perhaps they do if they live off of vermin that live off of human food waste. If so, that probably wouldn't be considered a natural cause of death. Who knows? The Caretaker has not followed up with the DEC to see if they looked into the cause of death, perhaps he will do so in the next few days. However, the Caretaker does believe he knows what breed of owl it was, a Short Ear Snow Owl. Since finding the owl, he saw some photos of owls labeled as such and from his memory of the owl he found would have to say that it looked just like the ones in the photos.

Out of respect for the owl, the Caretaker did not take any photos of the owl he found. He figured that if it was his lifeless body found floating in the Lake (which has almost happened on at least two occasions) he would rather people not take photos of it. Humanity on the whole has already shown this bird (and many others) enough disrespect since it was probably our actions that killed it--pesticide use, destruction of habitat, cholesterol problems, etc. When the Caretaker obtains more information on the owl he will be sure to pass it on.
Posted by The Caretaker at 3:08 PM